How we found her. 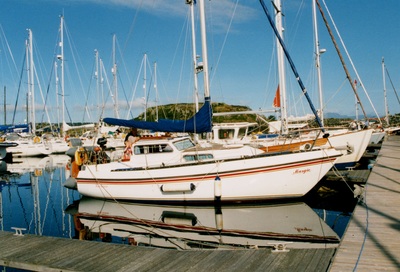 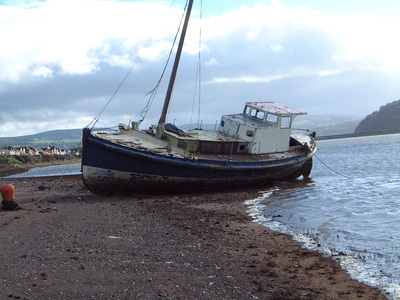 By 2000 my family was growing so two adults and young 3 children didn't fit very well  on our 28ft Bruce Roberts GRP Yacht (seen above on the west coast of Scotland). We had started to get more adventurous cruising Wales, Isle of Man, the West coast of Scotland and the Hebrides. I'd always loved the shape of the RNLI Watson's  and would love to have purchased a nice one at that time but the budget wouldn't allow.

We came across a nice looking one (A wreck was the truth) in Deganwy North wales (Near Conwy) and as luck would have it I could just about manage to buy her and keep the Yacht for a bit. She had been abandoned and repossessed by court order due to lack of payment of harbour dues.

I bought her for a song I thought on the 2nd of November 2000 and then realised that the cost of craning and moving her to my home in Lancashire would cost double what I paid for her. Two years late I sold the Yacht to keep the hungry Lifeboat fund afloat and embarked on the major task of rebuilding her. Work started on her restoration in 2003.

My wife wasn't keen on the idea and my shipwright friend thought I was crazy but "I had a dream" as they say!

If I had known then that I would ultimately spend 300 times her original purchase price I would never have started but when you see the finished result you may think that it was worth it.......I still do think it was worth it ! but wouldn't do it again either.
Powered by