The team of volunteers are all great friends and most of the team have spent years working on the project in their weekends and sometimes in the week for those with more available time. Ages ranges in the team have ranged from 6 to 75 years old. 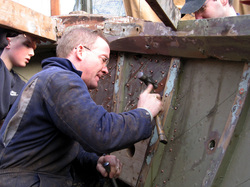 Mark Raynes (owner)
I'm the one with the dream of owning / restoring an old lifeboat. I am an engineer by trade and can turn my hands to anything, Mechanical, Electrical and most woodwork. 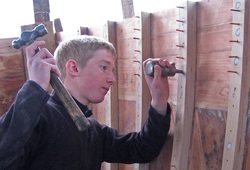 Tom Raynes (Apprentice engineer) my son started working on the boat age 6 years and is now an excellent engineer. Tom has solved many of the problems that other members of the team scratched their heads about. For example how to remove the blind keel bolts near the stern. 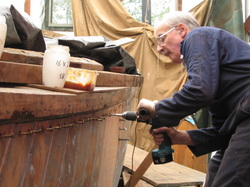 Frank Raynes (experienced electrical engineer) my Dad, who is a very experienced industrial engineer and consultant. Worked a lot on the  boat in the first few years, unfortunately a lot less in the last few years due to house restoration projects of his own. Hopefully he will join us again in the next year or so to help push the project to completion. 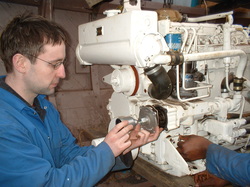 Peter Short ( Degree in Mechanical engineering) . Joined the project as a student from John Moores University following a presentation I did. Peter is now a very experience manufacturing engineer working on CNC's and quality control. 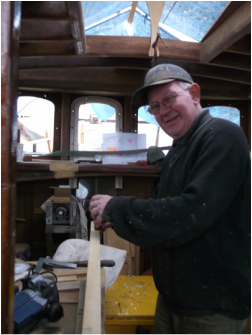 Brian Cubby (experienced Joiner). Brings master craftsmanship skills around anything wood, which is almost everything on a lifeboat. Brian's work is outstanding, he was a shop fitter but could easily have been a shipwright. He has been an inspiration and really helped us progress. 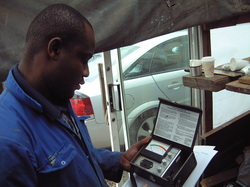 Uwem Udo (Chartered Mechanical engineer) Joined the project as a student from John Moores University following a presentation I did. He is an experienced marine engineer and now works as an engineer / project manager in the Power sector. Uwem brings lots of specialist skills to the team. 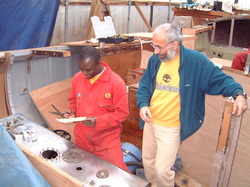 Maurice Asuquo  (PhD in Mechanical and Marine engineering).Joined the project as a student from John Moores University following a presentation I did. He is now a freelance consultant. Maurice brings lots of specialist skills to the team and is a real perfectionist in everything he does. Seen (left) with his John Moores tutor (right) on the boat.

Steve Kernigan (Experienced Joiner) he joined the project for a couple of years, he's an experienced joiner who had never saled but we converted him to wooden boats and he now has his own project on the same boatyard. 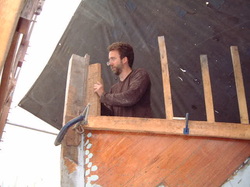 Craig Chad (Shipwright) was working for the maritime museum in Liverpool and joined us for a short while before he moved to the other end of the country to take a new job at Cockwells Traditional boat builders in Cornwall a premier league boatyard. (shame for us good luck to him). He helps us with some difficult jobs like replacing the stem and scarfing in some new frames. 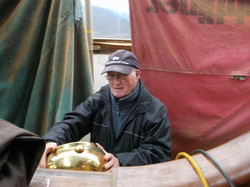 John Welsby (Experienced Mechanical engineer) Is a very experienced Paper mill engineer and model engineer, he has been chief designer and Auto-cad specialist as well as making lots of complex steel fittings for the boat in his own machine shop.

Darren Richardson (Welder) Old Watson have lots of part that need specialist fabrication, welding and forging skills, Darren is a master at this and working in stainless steel. He made all of our new floors for the propeller tunnel and every deck knee in polished stainless steel. We really couldn't have managed these jobs without him. 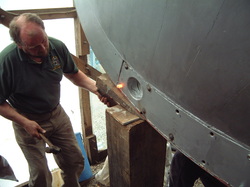 Sam Cooke (Blacksmith) Joined for a specific project to teach us a little about forging and rivet making. We purchased our own forge and will a little training from Sam we became proficient in making our own rivets for the hauling  plates and enabling us to forge our own floors and keel bolts. 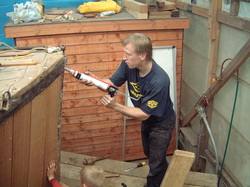 Carl Hughes (Joiner) joined us for a while bringing his specialist woodworking skills and through our project got a job with a local boatyards as a shipwright. He was very productive and the team miss having him around. 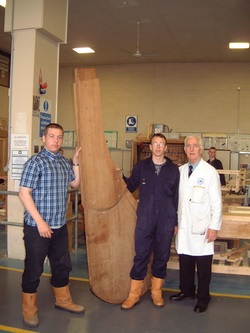 Dave Rogers and the excellent students from the Lairdside foundation in Liverpool. They built a complete new rudder and all the fittings in what was the Camel Lairds apprentice training college. (lovely people and a great organisation!). 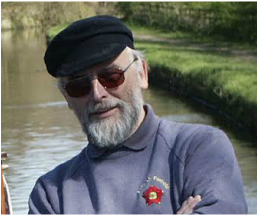 Maurice Lammas (My Dad's Friend) Joined us for a couple of days to help build the boat house which was a huge job that we couldn't have done without lots of help.
• Spent many years in Probation service.
• Volunteer Skipper on Charity Barge ‘Rose of Parbold’ 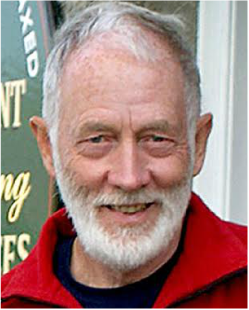 Steve Hooley (My Dad's Friend) Joined us for a couple of days to help build the boat house which was a huge job that we couldn't have done without lots of help.
• 6 Years regular Army. Royal Engineers. Military Survey

• 8 years as volunteer Crew on Charity Barge ‘Rose of Parbold’ 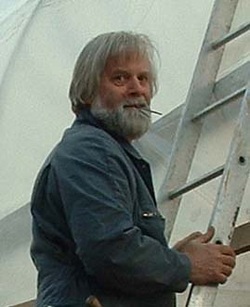 Bill (My Dad's Friend) Joined us for a couple of days to help build the boat house which was a huge job that we couldn't have done without lots of help.
• Trained as Carpenter.
• Worked in the building industry specifying and selling Flooring and ceiling systems.
• Spent 6 years living on 36 Ft Yacht. Sailing the islands
Powered by