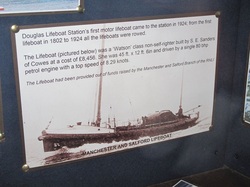 The MANCHESTER AND SALFORD is an ex-RNLI rescue boat, built in 1924 at a cost of £8456 which was funded by  donations from the people of Manchester and Salford. 25,000 people attended her naming ceremony on 20 June 1924, when she was the first lifeboat to travel up the Manchester ship canal. She was constructed of Honduras mahogany on oak frames with Canadian Rock elm and was copper fastened. She had two masts with a large sail area and drop keel and a 80 bhp Weyburn DE6 petrol engine. Her speed was nine knots at 800 RPM with a 24" x 22" propeller. A radio was fitted in 1938. MANCHESTER AND SALFORD was stationed at Douglas on the Isle of Man until 1946 when she went into the relief fleet. She remained with them until 1956, serving at Islay, Barra Island, Campbeltown and Stornoway. In total, she was launched forty times and saved thirteen lives. Ten years ago, MANCHESTER AND SALFORD fell on hard times and was abandoned at Deganwy where she washed up on the beach. She was re-possessed and then rescued by the current owner. A major restoration project is now underway to rebuild her from the keel upwards.

The Lifeboat station has great records about the rescues the boat has been involved in as does RNLI HQ in Poole. Some stations even hold the original rescue transcripts as written by the Coxswain at the time of the launch. As this is a really interesting aspect of the history of the boat I spent some time researching it. The main sources of records and photos are:
1. The Lifeboat enthusiasts group.
2. The RNLI at Poole.
3. The lifeboat stations.
4. The internet is a great place for all ship and aircraft records.
5.Your local newspaper achieve Library (i got some great stuff on the naming ceremony and some of the rescues).
6.Previous owners normally have some pictures.
7. The National maritime museum at Greenwhich have all the engineering drawings for many lifeboats and you can mail order them or vist as I did.
8.Bekens Maritime services Ltd (Cowes) are and have been the main RNLI photographers since about 1900. I was able to purchase a photo of my boat in 1924 quite easily which looks great framed. Tel: 01983 29731.
9. The National Historic ships register may also help.
10. The small ships register (mine was registered) and they hold quite a lot of information.