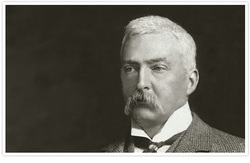 In 1873 George Lennox Watson established the first yacht design office in the world. Initially specialising in sailing yachts, G.L. Watson & Co. achieved international acclaim with the America’s Cup challengersThistle, Valkyrie II, Valkyrie III and Shamrock II. The legendary Britanniaremains the most successful racing yacht of all time and the list of graceful designs includes such yachts as Vanduara, Queen Mab, Meteor II, Bona and Rainbow. G.L Watson and J.R Barnett were the main designers of RNLI lifeboats in the early 1900's. 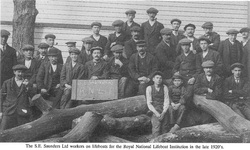 The S. E. Saunders team that built the boat in Cowes Isle of white. S E Saunders were one of a number of builders working for the RNLI in this period. Samuel Edgar Saunders founded the company in in the late 1800's and they went on to build boats, planes, hovercraft, many special vehicles and most importantly. RNLI Lifeboats.

The naming ceremony in the Manchester ship canal. 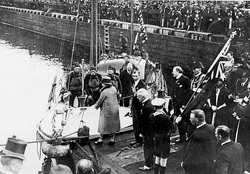 25,000 people attended her naming ceremony on 20th of June 1924, when she was the first lifeboat to travel up the Manchester ship canal.
As you can see from the historic newspaper clippings from the evening Chronicle Local lifeboat crews, local Police, sea scouts, boy scouts,Guides, clergy, ladies Guild, a detachement of Troops and and a number of churches all across the region joined to sing songs and bless the boat and her crew. The boat is unusual having been one of only a few to be named away from her allocated station. 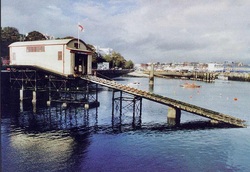 ON689 The Manchester and Salford lifeboat was stationed at Douglas Isle of Man from 1924 to 1946 covering a large part of the Irish sea. Later when in the relief fleets She continued working until 1956, serving at Islay, Barra Island, Campbeltown and Stornoway. In total, she was launched forty times and saved thirteen lives. It is thought that she may have carried out many more services during the war period when recording services may have been suspended. We hope to bring her back to Douglas to support the RNLI on LIfeboat days in the future!
Powered by